Rhizosphaera needle cast is often to blame for brown or thin spruce in the landscape. In Kentucky, Rhizosphaera needle cast is the most common disease of spruce; it also affects some pine species. This disease causes needle drop on lower branches, resulting in a distinct thinned appearance. Management options include reduction of plant stress, good sanitation practices, and timely use of fungicides. 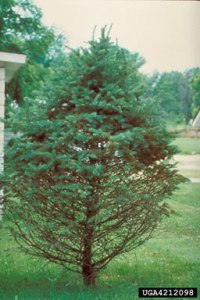