One of the more unusual species to find in gardens is a terrestrial flatworm called the hammerhead worm. This week, I have had two reports of them; one from the mountains of eastern Kentucky (Letcher County), and the other from the Purchase Area in Western Kentucky (Calloway County). While there are native hammerhead worm species, this species appears to be invasive from southeastern Asia; however, I am not able to confirm this. This species is widely distributed and has been in the United States for over a century.

Hammerhead worms look like flattened, very long earthworms, and have a broad shovel-like head. They can be 10 or more inches in length. 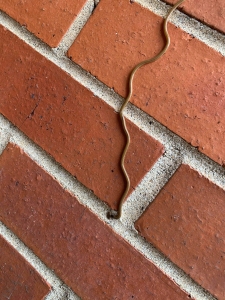 Reproduction can be sexual, or asexual as all the species are hermaphroditic.  Some species can use fragmentation, fission of posterior body fragments. These diverse reproductive strategies enable hammerhead worms to spread rapidly.