Wolf spiders get a bad rap. They are common spiders, found under logs and rocks, as well as in open areas. They are also active hunters, meaning that they don’t spin a web like some of their more famous relatives. They can produce spider silk, but they use it for lining burrows or wrapping eggs sacs instead. They are large spiders; the main portion of their body is usually an inch on its own, with legs added in, they can be around 2 inches wide. The Carolina wolf spider is one of the larger spider species we see in Kentucky. Their size is useful for them to stalk and subdue large prey; prey that we often consider to be pests. Not only are they big, but they are fast too!

Some of these spider attributes make people a little uncomfortable though. Their size can be intimidating to those who prefer their spiders be fun-sized, like Halloween candy, and their speed frightens folks trying to catch them. Their coloration is also concerning to some folks. They are usually covered with dazzling arrays of bands and spots and nifty brown “fur”. Some, like the tiger wolf spider in Figure 2, even have stripes of orange. Being a brown spider, though, means they will be confused for the brown recluse spider, a species that often conjures up dread. You can tell the difference by size—wolf spiders are usually much larger than a recluse; by color—wolf spiders are a darker brown than recluses, and by eye pattern—wolf spiders have eight eyes, recluses only have six. 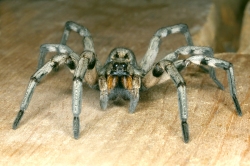 Figure 1: Carolina wolf spiders are large spiders with a grey-brown coloration. They have burrows in soil that house them during the day, but they emerge to hunt at night. (Photo: Jim Kalisch, University of Nebraska-Lincoln Entomology Department) 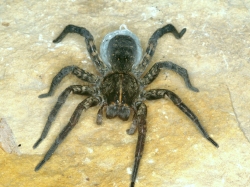 Figure 2: Tiger wolf spiders are mostly brown but have bright orange patches and stripes down the back of their head. This female is also holding her egg case below her. Wolf spiders tend to carry their eggs till they hatch. (Photo: Jim Kalisch, University of Nebraska-Lincoln Entomology Department)

Wolf spiders are also fairly famous for trying to enter buildings in fall. Luckily, we have very little to fear from these eight-legged predators once inside. They can bite people, but this is not very common and the sensation for most is like a bee sting. Pain may last for about 10 minutes and there might be some swelling; this can vary person to person.  It’s always best to treat spiders with respect and give them their space though. Wolf spiders do not want to bite you; it is a last-ditch defense tactic for them. If you don’t want them inside, pest proofing keeps their food out and keeps the spiders from entering as well. Glue board traps, set near the wall or in corners, will also catch spiders as they move around the perimeter of rooms.

If you ever want to confirm if the spider you are seeing is a wolf spider, all you need to do is look deep in their eyes. Spider eyes are illuminating for deducing what family they belong to. Wolf spiders (Lycosidae) have two large eyes in front, with two more above them. Under the front-most large eyes will be a row of four small eyes, turned into a slight frown. 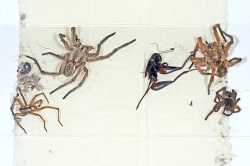 Figure 3: Pest proofing ensures that fewer things like crickets get inside, which also means fewer spiders. However if you don’t like eight-legged house guests, glue board traps are a great way to passively catch spiders that do enter. (Photo: Jim Kalisch, University of Nebraska-Lincoln Entomology Department) 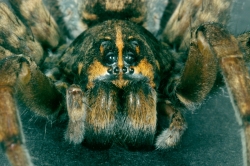 Figure 4: This close up of a tiger wolf spider shows off the eye pattern for the wolf spider family. Two large eyes in front (with two above those) and four frowning, smaller eyes below. (Photo: Jim Kalisch, University of Nebraska-Lincoln Entomology Department)