Be on the lookout for an introduced invasive plant recently found in Kentucky.  A homeowner in Hopkinsville, Kentucky contacted the Christian county Extension Agent for Horticulture about a unique plant discovered in her home landscape area.  The plant identified as Tropical Soda Apple (Solanum viarum) is a perennial broadleaf native to Brazil, Argentina, Paraquay, and Uruguay.  Identification was confirmed from plants submitted to the University of Kentucky Weed Science Herbarium (July 2019).

Tropical soda apple (TSA) was first discovered in the United States in 1988 in pastureland in south Florida (figure 1).  The route of initial introduction into the U.S. is specifically unknown, but may have been through cattle imported from Brazil (ca. 1985) accidentally carrying undigested TSA seed.  Since its introduction into the United States, TSA has rapidly spread to grazed pasturelands and natural ecosystems.  This weed has been reported in nine states within the southeastern U.S., which includes Florida and Mississippi where it was first observed, plus Pennsylvania.  TSA is known to be spread by livestock and wildlife that consume the fruit, as well as, through hay, sod, grass seeds, and composted manure.  The introduction observed in Hopkinsville, KY is thought to have been from bagged pine needle mulch purchased from a garden center associated with a national hardware store, which provides an opportunity for widespread distribution.  According to the homeowner a number of new seedlings plants have emerged throughout the summer from the mulched landscape area (Figure 2).

There is a national concern relative to the threat associated with this invasive plant species.  TSA has spread within some areas of the southeastern U.S., but is known to be most problematic in grazed pasturelands in the Mid-South whereby it limits livestock grazing.  It was placed on the Federal Noxious Weed List in 1995.

Tropical soda apple is a member of the Solanaceae or nightshade plant family.  As young seedlings, TSA has the general appearance similar to horsenettle (Solanum carolinense).  This can make it more difficult to separate the identity of these two different plants when they are at younger growth stages.  Both plants have oak-shaped leaves containing thorns on the stem, stalks, and leaves.  As TSA matures, the leaves are broader, contain long yellow-white thorns, and plants grow into much larger, shrub-like plants (Figure 1).  TSA can also be distinguished from horsenettle by their creamy white flowers (Figure 3), and immature green and white striped fruit resembling tiny watermelons (Figure 4).  When TSA fruit matures these berries containing seed turn yellow. 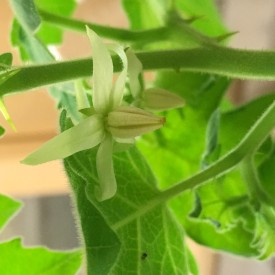 If Suspected Plants Are Found…

It is important that efforts be made to keep this plant from further introduction and spread into Kentucky whereby it could greatly impact pasture fields and natural ecosystems.  If you find a plant that is suspected of being tropical soda apple, please contact Marcy Rucker (marcy.rucker@uky.edu), JD Green (jdgreen@uky.edu), or your local Cooperative Extension office.