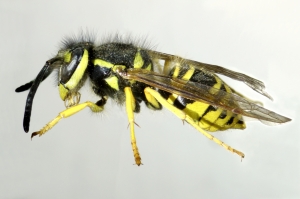 Yellowjackets are social insects, with a queen and workers in the colony. They construct their nests in places that are often very inconvenient for us. Sometimes they use abandoned rodent burrows under the soil, but they may also take advantage of our structures and build in wall voids, attics, crawl spaces, gutters, and stone walls. They are protective of their home, and if you accidentally discover it, they will send out the welcome wagon for you. Yellowjackets are notorious for their aggression and many mowers, diggers, and home repair folks can tell you of attacks. One issue with yellowjackets is that they have un-barbed stingers, in contrast with honey bees who have a barb on theirs. Without the barb, yellowjackets can sting until they run out of venom.

Early in the growing season, yellowjackets could be considered beneficial insects as they are highly predaceous and consume pests like caterpillars. However, at the end of summer and beginning of autumn, they begin to feed more on sugary foods such as soda pop, fruit, ice cream, and others. This leads to people interacting with stinging wasps at picnics, festivals, and fairs. The wasps can be seen at trash cans or feeding directly from bowls of food or even cans of cola. When disturbed or, in some cases, accidentally ingested, yellowjackets will inflict painful stings. 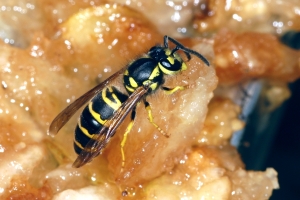 Figure 2: A yellowjacket feeding on something sweet and delicious, this could lead to a painful sting for the person who wanted to eat this food. (Photo Jim Kalisch University of Nebraska-Lincoln Entomology

To prevent interactions between people and yellowjackets in late summer, sanitation is the key. Outdoor trash cans should be emptied on a regular basis and should have tight fitting lids that are replaced after each use. Open access trash cans or overflowing trash cans are sure to attract hungry wasps. Trash at picnics (such as watermelon rinds) should also be collected into bags that are tied shut until deposited in a larger bin.

Yellowjacket traps can also help to draw the wasps away from areas with people. There are commercially made traps available or you can fashion one yourself from a 2-liter pop bottle. In spring, a trap would utilize protein-based bait (such as fish) but by late summer fruit juices would be a better choice. 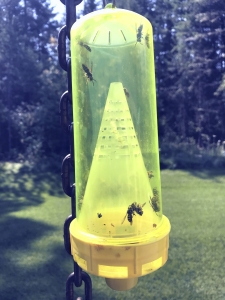 If a yellowjacket colony is located, it can be treated using dust or aerosol insecticides. Aerosols are handy due to their quick action and the special triggers they have for application at a distance. Sometimes they might not be the best choice though as the entrance you see isn’t letting you get enough product into the colony. In those cases, a dust lasts longer and will help to eliminate the colony. Pyrethrins and pyrethroids are the most common insecticides in these products. Be sure to make the application at night to maximize control and minimize the chances of being stung.