Phyllosticta leaf spot of soybean has been observed in a few fields in western Kentucky recently.  Although the economic risk of this disease is very low, its symptoms resemble those caused by frogeye leaf spot.  On susceptible soybean varieties, frogeye leaf spot does have the potential to cause economic yield reductions, so it is important to be able to recognize these two diseases. 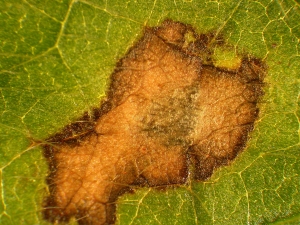 In most years, symptoms of frogeye leaf spot (caused by Cercospora sojina) begin to appear in fields sometime after canopy closure (when the soybean plants have grown large enough that the gap between the rows is not easily visible).  Symptoms of this leaf disease appear as somewhat round, tan to gray lesions (spots) with a dark border around them.  Under warm and humid conditions generally observed in July and August, masses of spores can sometimes be observed on the underside of the lesions with the aid of magnification.  These masses of spores will appear as gray to steel-blue colored mass of “fuzz” (Figure 1).  On susceptible varieties, significant yield reductions can be caused by frogeye leaf spot if the disease is not managed.  If a susceptible variety has been grown, an effective fungicide can be applied to manage frogeye leaf spot.  Since resistance to strobilurin (QoI) fungicides is widespread in the frogeye leaf spot pathogen, it is important to choose an effective fungicide product.  For more information about efficacy of foliar fungicide products on soybean, the publication, “Fungicide Efficacy for Control of Soybean Foliar Diseases” is updated annually on the Crop Protection Network. 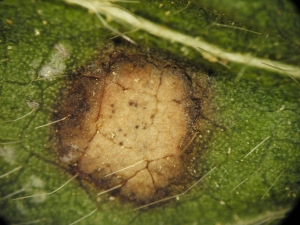 More information on how to distinguish between frogeye leaf spot and other “look-alike” diseases, including Phyllosticta leaf spot, is available in the publication, “Frogeye Leaf Spot” on the Crop Protection Network.