Since mid-March until the beginning of May, reports, inquiries, and personal observations on the presence of several worms or flying insects that are becoming abundant on alfalfa, wheat and tobacco have caught my attention. All these fly species feed on decomposing organic matter and prefer moist substrates. The environmental conditions during winter and spring provided favorable conditions to produce population outbreaks in the crops mentioned above. These flies are described below.

Crane Flies or Tipulids in Alfalfa and Wheat

The presence and damage caused by larvae of crane flies in alfalfa were reported in an article of the Kentucky Pest News last April. These insects have also been observed flying in wheat fields, pastures, and lawns. Traps utilized to monitor pest moth species (cutworms, corn earworm. armyworms, etc.) that affect field crops have been filled with these insects (Figure 1). Adult crane flies, mosquito hawks, or tipulids are “intimidating giant mosquito-like” insects due to their size; however, they do not bite.  They live for short period (3 to 7 days) to mate (Figure 2), and they may only require some moisture during their short existence. However, in the Pacific North West there are species of crane flies with larvae that feed on grasses, clovers, root vegetables, and decaying matter.

Picture-winged flies (Figure 3) were observed in conspicuous numbers by Clint Hardy (Extension Agent for Agriculture and Natural Resources) and by the author of this article while conducting evaluations for aphids in wheat fields in Daviess County, and in western Kentucky, respectively. At the UK Research and Education Center in Princeton, picture-winged flies were probably the most abundant insects in wheat, although this insect was not tallied because they do not cause any damage in wheat. Picture-winged fly belongs to the Ulidiidae family (formerly known Otitidae). Adults may feed on sugary substances; larvae feed on accumulations of decaying organic matter lying on the ground or partially buried in the soil, on rotting fruit, and on other kinds of decomposing vegetation. Larvae were also reported feeding on decomposing bulbs of commercial onions and wild garlic; the latter will be beneficial in reducing wild garlic in Kentucky. It is not necessary to use insecticides to control this insect in field crops. 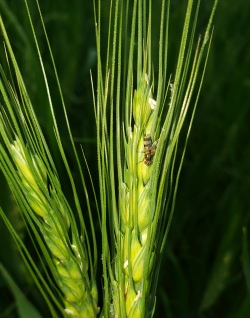 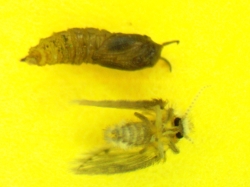 Moth or Drain Flies in Tobacco

Flying moth flies and their pupae (Figure 4) were observed in a tobacco sample received at the Plant Disease Diagnostic Lab located at the UK Research and Education Center in Princeton. In human dwellings, these flies are commonly found on the walls of the bathrooms, kitchens, basements and other locations where sewer drains and plumbing fixtures are located. Adult flies have abundant hairs all over the body and wings giving them a moth-like appearance. They are poor fliers and usually are found close to the drain or area of origin.

In nature, moth fly larvae normally occur in aquatic habitats that experience intermittent submersion. They reproduce in polluted, shallow water or in highly moist organic solids where they feed on decaying organic material in mud, moss, or water. The occurrence of this fly in floating seedling tobacco trays may be due to the presence of decaying matter in the substrate used or contaminated soil media. Moth flies are innocuous, do not feed on live plants, or transmit diseases.

A tobacco sample collected by Dr. Bailey (Extension Tobacco Specialist) had larvae of fungus gnat flies (Sciaridae) on it. Fungus gnat adults can be easily found and seen in greenhouses. This year we have been observing them in our wheat and cowpea seedlings grown in the greenhouses and used to rear insects in laboratory colonies. Adult fungus gnat flies (Figure 5) are small dark flies (2 to 8 mm; 0.08 to 0.3 inch long) that prosper in areas of high humidity. Fungus gnat larvae (Figure 6) are transparent to whitish with a black head. There may be occasional outbreaks in fields; they can be observed clinging together and forming a line while migrating in search of a new food source. Larvae may feed on the roots of tobacco seedlings. In melon seedlings, fungus gnats were reported feeding on stems, causing plants to wilt. Their impact on growing transplants may be minimal. Bacillus thuringiensis israelensis (Gnatrol) might be used to control fungus gnat larvae. Dr Lee Townsend described the management of moth flies in homes and fungus gnats in tobacco float systems in articles published in KPN (See below).

Given the outbreaks described in this article with insects that thrive on moist soil, seedcorn maggot and slugs are pests of corn and soybeans that may become abundant this coming season if rains and soil maintain favorable environmental conditions for these pests. Scout agents, consultants, and farmers need to be aware of this probability.