Causes for Green Stem Syndrome in Soybeans are Still a Conundrum

Posted on November 6, 2018 by ksleonberger

Green Stem Syndrome (GSS) is a condition where the stems of soybean plants remain green when the rest of the plant is senescing (normally stems, pods and seeds are brown and ready for harvest) (Figure 1). The timing for the appearance of GSS happens when the crop is maturing.

The Plant Disease Diagnostic Laboratory in Princeton, KY received two samples of soybean plants with signs of green stem syndrome. In the first case, a sample from Calloway Co., 50 percent of the plants shown green stems. The second case was from Marshall Co. In this latter instance, all plants in the field had green stems (Figure 2); however, the farmer had planted the same variety in another location where none of the plants presented GSS. Thus, the causes, occurrence and causal agent for green stem syndrome in soybean are still an enigma. 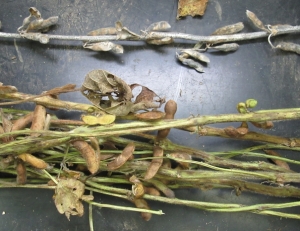 Several hypothesis have been made as possible causes of GSS in soybeans, these include pathogens, physiological reaction of plants, and insect feeding.

In the past, Bean pod mottle virus (BPMV) was associated with GSS however, research conducted at the University of Illinois (Hill et al. 2006 and Hobbs et al. 2006) found that many plants infected with BPMV did not develop green stem disorder, and conversely, many plants that had green stem disorder were not infected with BPMV.  Statistical tests in this study indicated that GSS was independent of BPMV infection at growth stage R6, and BPMV infection did not increase GSS incidence in comparison to controls. In this study, researchers also mentioned that bean leaf beetle, leafhopper, or stinkbug feeding did not have an effect on the incidence of GSS.

In Japan, there are several reports of GSS or delayed stem senescence. In one study, it was shown that this condition was presented under excess wet soil treatment. In addition, GSS lowered pod/seed number and increased vegetative organs by the increased supply of cytokinin through xylem during seed-filling. In the contrary, drought stress treatments during the periods of flowering to pod elongation, later seed filling, and seed maturing decreased GSS (Sato et al, 2007).

In Kentucky, a study conducted using pod removal treatments in 2002 and 2004 applied at the beginning of growth stage R6 to several soybean varieties from distinct maturity groups showed that pod removal caused GSS. Stem maturation was always delayed relative to control plants and the delay was larger for the 50% than the 25% pod removal treatment. The appearance of brown stems on depodded plants ranging from as few as 4 days to a month or longer compared with the control non deppoded plants. The study also showed that GSS was associated with physiological changes in the plants such as high concentrations of soluble sugars, starch, and N in the stem. Starch and N are normally mobilized from stems during seed filling and this movement did not occur in this study. The authors of this study suggested that disease, insects, and environmental stress may cause GSS indirectly by reducing pod load.

In recent years, several studies conducted in Brazil suggested that the red banded stinkbug (RBSB) (Piezodorus guildinii), not present in Kentucky yet but well established in the Gulf States, was responsible for delayed maturity in soybeans. A study conducted by S. Vyavhare in 2012 and 2013 in Texas (Vyavhare et al. 2015) had similar results. Vyavhare found that at densities of 8 red banded stinkbug per 0.3 m of soybean row-lengths produced a significant increase in the number of green leaves retained on plants at maturity (Figure 3). Also, Vyavhare found that there was a lack of a significant positive correlation between mechanical pod removal and green leaf retention.

In Kentucky, we had certain conditions that might be conductive for a prelude of GSS, such as the presence of rains and insects; however, natural pod removal did not occurred. The following might be a subjective statement on view of GSS in 2018. During August, leaf bean beetles were observed in great numbers, as well as, three cornered leafhoppers. Based on my personal view they were more abundant than in 2016 and 2017. Also, several species of stink bugs were present later in the season across several areas of KY. Bean leaf beetles are vectors of Bean pod mottle virus, but as shown above, the virus alone might not cause GSS. It was theorized that insect feeding through unknown mechanism might delay soybean maturity.

GSS can complicate the harvesting of soybeans. Combines can be damaged, harvesting time can be extended, and yields can be reduced. Darren Muller (Iowa State University) suggested that the best option would be grinding slowly through the fields prior to a hard frost; however, in Kentucky frost can be too late in the season compared to Iowa.  The use of a desiccant such as Gramoxone® has been inconsistent.

Be on the Lookout for Green Stem Syndrome in Soybeans. By Daren Mueller (Link)