After spending about 9 months as eggs in masses on twigs of wild cherry and related trees, the first few tiny eastern tent caterpillars (ETC) of the season should soon be leaving their eggs. The onset of the single generation that occurs each year varies with the character of the season. Hatch was noted as early as March 14, 2012 during an unseasonably warm spring and as late as April 2, 2014 during one that was slow to develop. 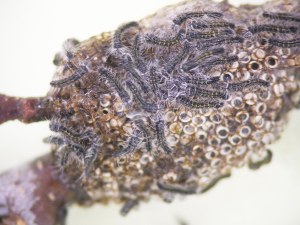 The small but hardy worms are among the first insects to become active in spring. They are prepared to cope with erratic temperature swings. Egg hatch is relatively random and occurs over an extended period. This increases the chance for survival in case of late freezes. In addition, these resilient caterpillars will remain clustered on egg masses (Figure 1) to “wait-out” temperatures that are too low for feeding and development. ETC grow and develop when the temperature is above 37°F.

While it is possible to predict approximately when to expect tent caterpillar activity, there is no reliable information to track general population trends other than observing local activity and watching for tents to develop from mid-March through mid-April. You can find more information on this topic in the Extension publication, Checking Eastern Tent Caterpillar Egg Masses (EntFacts-449).