Home › Forages › Be Ready for the Alfalfa Weevil!

Be Ready for the Alfalfa Weevil!

Alfalfa weevil is the key pest of the first cutting. Populations have been above normal over much of the state during the past 2 years, so it is important to be watchful this spring. High populations may last for 2 to 3 years before natural enemies, diseases, and climatic factors begin to take their toll. 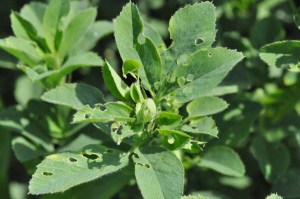 Temperature drives insect development, so they may appear early or late, depending on how the spring unfolds. Fortunately, an alfalfa weevil degreeday model can indicate when to start checking fields for tip feeding (Figure 1), the signature damage of this key crop pest.

The table below shows the variation in degreeday accumulation that can occur in consecutive years, along with the predicted values for 2018.

Table 1.  Historical degreeday accumulations for 2015 and 2016 indicate the potential variation in initial appearance of tip feeding by the alfalfa weevil and predicted dates for 2018.
* Predicted appearance based on forecast of temperatures

The accumulation of 190 degreedays (base 48oF) signals the time when early tip damage can appear in fields. Check degreeday accumulations for your area at the UK Ag Weather website.

The second critical time to check for damage should occur when 225 degreedays have accumulated. At this time, spring-laid eggs should have begun to hatch. Pay particular attention to fields that had significant weevil damage last spring.