Male adult moths of the true armyworm (Mythimna unipuncta), fall armyworm (Spodoptera frugiperda), and black cutworm (Agrotis ipsilon) have been captured in increased numbers during the last couple of weeks in pheromone-based traps in Princeton (Figure 1). As individual species, their numbers are not that great, but if added all together, their numbers were above 80 from August 5 to August11 this year. Observations of damages in pastures and hay have been reported by Clint Hardy and Nikki Bell, Agriculture and Natural Resources Agents from Daviess and Marshall Counties, respectively. 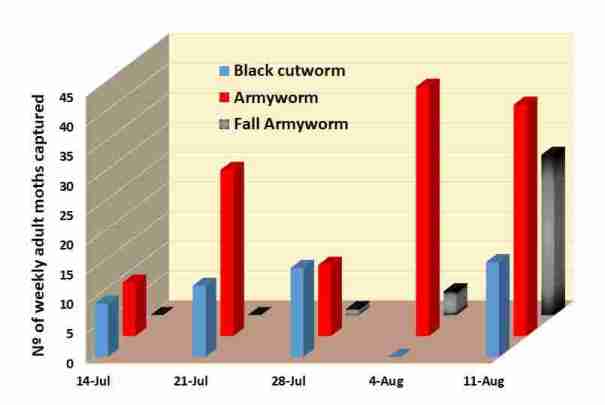 Although true armyworm and black cutworm damage is more intense in spring compared to late summer abundance of fall armyworms, all these species can affect plants during late summer days. Usually these caterpillars are active at night, and in many cases, their feeding can go unnoticed initially.  However, when the farmers spot damage, it can be too late or the caterpillars might be too large to be effectively controlled by insecticides.

For a listing of available insecticides, use those listed in, Insecticide Recommendations for Field Corn (ENT-16)