Southwestern corn borer (SWCB) (Diatraea grandiosella) was a caterpillar regarded as one of the most serious insect pests of corn in the late 1970s. Since then, it has sporadic appearances; however, it is more difficult to control than the European corn borer, although its biology is similar to European corn borer. It has two or more generations per year and the second generation during mid- to late summer causes the greatest damage. The moths are dull white or buff-colored and about 1 inch long, although their size can vary. Female moths live 5 to 7 days but lay up to 250 eggs during their life span. Eggs are laid singly or in groups of two to five, with the flattened eggs overlapping like fish scales. Initially, eggs are greenish-white, but develop three distinct red transverse lines within 24 to 36 hours. Eggs hatch in 4 to 7 days. First instar larvae have brown head capsules and their bodies are translucent white or yellowish with black spots on the body. Older larvae have more distinctive black spots. Larvae reach a maximum length of 1¼ inches (Figure 1).

The first generation attacks whorl-stage corn and is associated with yield losses by stunting or killing plants. The second generation occurs during mid- to late summer and increases harvest losses through stalk breakage due to extensive tunneling. In fall, overwintering larvae increase plant lodging by girdling the base of the stalk. 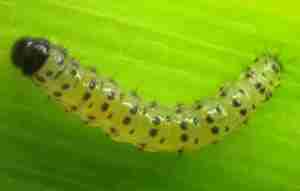 Compared with previous years, SWCB trap captures in Princeton, Kentucky in 2017 are high, reaching 222 and 153 captured male moths during the last week of July and first week of August, respectively (Figure 2). Although these numbers did not reach the highest numbers captured in 2012 (950 on the last week of August), farmers and consultants need to pay attention to this pest as it may be laying eggs during these period. 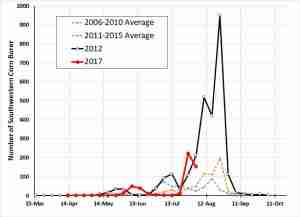 Figure 2. Numbers of southwestern corn borer males captured in a pheromone baited trap at the University of Kentucky Research and Education Center in Princeton.

This is the most efficient and economical method of preventing plant damage and yield losses to SWCB. However, wet weather frequently delays corn planting and increases the possibility of borer infestations. Corn planted after May 1 has a greater potential for SWCB infestations.

Monitor fields in early June for initial shot-hole feeding to whorl leaves. If damage is noted while walking through the field, examine 20 consecutive plants for each of several locations within the field and record the number of plants with damage. Select the starting point for each location randomly. Pull out the whorls from two damaged plants from each sample to note if the larvae are still present in the whorl and determine if the damage was caused by SWCB or European corn borer. Controls should be considered for first generation SWCB if 35% of the plants show damage and larvae are still present in the whorls.

No-till corn production has increased substantially in the 20 years since a serious SWCB outbreak. Prior to this change in corn production, control recommendations for SWCB included deep tillage, and destruction of corn stubble. However, in the scope of current soil conservation practices, this is not an option. Producers need to be aware of the potential problem with SWCB, particularly in no-till corn, and use field monitoring during the growing season and after harvest to base management decisions.

Currently, the YieldGard, YieldGard Plus, and Herculex hybrids provide the full-season control needed to prevent the stalk girdling caused by the overwintering SWCB larvae.

For a listing of available insecticides, use those listed for the European corn borer in this Extension publication: Insecticide Recommendations for Field Corn (ENT-16). .