A number of different stinging insects are active during summer and their colonies are approaching peak numbers. In many cases, control attempts are dangerous. If nests are located in or near high-traffic areas, hire a professional pest control operator who has the proper products and protective equipment for the task. Do-it-yourselfers should wait until after the nest has been abandoned in fall to remove it and make adjustments so the site is not used the following year.

Several species of yellowjacket build paper nests in the ground. These wasps excavate abandoned mouse or chipmunk burrows to accommodate a paper nest that may be home to 1,000 workers by late summer. These yellow and black wasps are about 1 inch long and have two pairs of clear wings (Figure 1). As with other wasps and hornets, they can sting repeatedly.

During summer, yellowjackets are busily capturing insects to feed to their developing larvae. Most stinging incidents result from accidentally coming too close to a nest or mowing over it. The wasps will boil out and repeatedly sting an intruder. In fall, yellowjackets shift their search to sweet liquids from over-ripe fruit, soft drinks, and trashcans. They can be persistent and may enter exposed drink containers. The result can be a very painful sting on or in the mouth.

Some bumble bees (Figure 2) also use abandoned underground burrows or almost any undisturbed shelter for their nest. These bees will line their nesting cavity with loose grass, moss, or other items they can readily collect. Instead of the paper nests of wasps and hornets, bumble bee nests will contain wax pots that they construct for larval cells.

Larvae will be fed a diet of pollen and nectar. Bumble bees are not overly aggressive but will attack and sting if their nest is disturbed.

Cicada killer wasps do not sting, but their activity in lawns unnerves many people. These wasps burrow into well-drained sand or loam soils.The tunnel entrance is about 1/2 inch in diameter and partly surrounded by excavated soil (Figure 3). Many can develop over time in an attractive area. In spite of their intimidating appearance, cicada killers do not defend their burrows, and they only sting if handled or mashed. Control is not needed.

European hornets are large (1.5 to 2 inches long) insects with brown and yellow markings and two pairs of brown wings (Figure 4).

Like yellowjackets, they construct paper nests, but these are usually located in hollow trees, or occasionally wall voids.  Typical colony size is 200 to 400 workers. They follow the same dietary sequence as yellowjackets (from insect proteins to sugars). Fallen fruit is a major attraction for them in fall. European hornets are unusual since they will fly at night and are attracted to light.

European hornets are generally less likely to attack a person coming near their nest and then only a few individuals will respond. There are not the multiple attacks that come from yellowjackets. European hornets are sometimes misidentified as giant Asian or “killer” hornets, which we do not have.

Baldfaced hornets are about 1 inch long and are marked with a white face and black and white abdomen. They make the familiar football-shaped paper nests seen hanging from tree limbs, in shrubs, and occasionally from structures (Figure 5).

A healthy nest can hold 200 to 400 of these insects. Baldfaced hornets tend to nest fairly high in trees. They are less likely to react to disturbances than yellowjackets, so they pose a potential problem only when nesting in high-traffic areas.

Paper wasps build open-faced nests (Figure 6) under eaves or overhangs or in voids. At least 3 species can be found in and around homes and structures.

Paper wasps capture insects to feed to their larvae so they provide a valuable service as predators. They can sting if disturbed but do not tend to defend their nests as vigorously as yellowjackets and European hornets.

Nests of the red wasp (Figure 7) and common paper wasp with its darker body are found frequently around structures. These insects (also called umbrella wasps because of the shape of their nests) generally do not pose a problem unless the nest is near a doorway, mailbox, or other frequented site.

The European paper wasp (Figure 8) is relatively new to Kentucky. It makes the open nest of a paper wasp but has markings of a yellowjacket.

Unlike our native paper wasps, they will build nests in enclosed voids, such as an outdoor storage chest. While not overly aggressive, it is more likely someone could come upon their nest unexpectedly, which can result in stings.

European paper wasps are excellent hunters and can remove many caterpillars from gardens established to produce caterpillars. 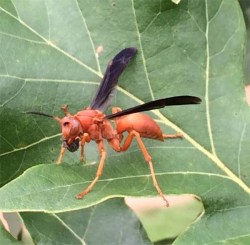 Attempting to treat or remove active nests of yellowjackets, European hornets, and baldfaced hornets is a dangerous undertaking. There can be several hundred individuals in a nest and their defensive response can be quick and painful. If the nest location is not a threat to people or animals, it is best to leave it alone. The workers will die in fall and fertilized queens will abandon it for winter shelter. While the nest will not be used again, the site remains attractive so it may be used in subsequent years. Remove the nest during winter and seal openings if it was in a wall void or an attic. Do not seal entries to an active indoor nest; the wasps will chew to freedom, which may be inside. They will not be happy.

If the nest poses an active threat and waiting until fall is not an option, then contact two or more pest control companies for bids on professional removal. It is better to avoid confronting wasps and hornets on your own.

Velvet ants are a familiar sight in late summer. Though ant-like in appearance, these are actually wingless wasps. Females are wingless so they are seen crawling determinedly across the ground. These bright red and black insects have long stingers and will use them if handled or mashed.

Velvet ants are solitary wanderers, there is no nest of them nearby. They travel in search of tunnels of ground nesting bees or underground beetle larvae to serve as hosts for their larvae. These wasps pose no threat unless handled so there is no need for control.