Southern rust has been active in a number of areas to the south of Kentucky.  See the southern corn rust map (Figure 1) available on the IPM-PIPE Web site.  Furthermore, activity in Nebraska (as has been documented) often indicates detection may occur soon in Kentucky. 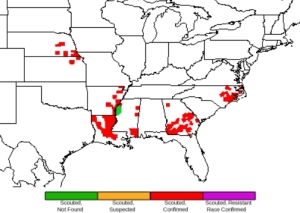 Southern rust (caused by the fungus Puccinia polysora) is one of two rust diseases found on corn in Kentucky; the other is common rust (caused by Puccinia sorghi).  Common rust is very common, being found at low levels in many fields in most years.  Adequate levels of resistance to common rust are found in the large majority of hybrids adapted to Kentucky.  In contrast, southern rust typically doesn’t occur in Kentucky corn fields, but when it does, it is capable of causing significant crop damage.  The reason for this is that corn hybrids adapted to Kentucky conditions usually are susceptible to highly susceptible, and the fungus is able to develop to high levels very quickly in susceptible hybrids.

Some features that distinguish these two rust diseases are as follows: 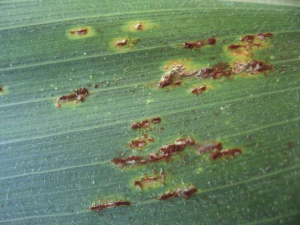 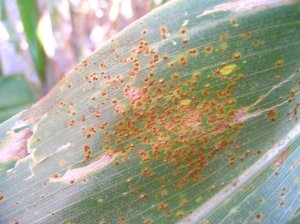 It is very difficult to make blanket statements about the value of a fungicide spray.  However, if I am standing in a pre-dent field with a high yield potential (or some specialty use), and I see significant southern rust activity, with a forecast of warm, humid weather, I feel concerned enough to suggest considering a fungicide application.